How To Handle A Car Accident In California

How To Handle A Car Accident In California

When you pull out of the driveway every morning, you’re not thinking about how to handle a car accident. It’s not exactly an uplifting thought, after all.

Still, it never hurts to be prepared.

Knowing exactly what to do if you ever find yourself involved in a car accident could make the difference between you being compensated fairly for any injuries you sustain and damages are done to your car or missing out on that entirely.

In a nightmare scenario, you may even end up on the hook for hefty repair and medical bills.

Don’t make an already stressful situation such as the aftermath of a car accident any more problematic than it needs to be. Learn more about the things you need to do after an accident to better protect yourself.

Pull Over To A Safe Location If Possible

Not everyone may be aware of this, but the law requires drivers to pull over when they are involved in a car accident.

To be more specific, the law calls upon drivers to stop their vehicles whenever an accident results in any injury or damage to property.

The chances of everyone involved in the accident sustaining no injuries, their cars remaining completely intact, and the surrounding environment being undamaged are minimal. What that means is that drivers will almost always be obligated by the law to pull over whenever they are involved in an accident.

When pulling over, try to place your car in a spot where it won’t get in the way of passing motorists. At the same time, though, don’t go so far away from the scene that investigators have a harder time piecing together what happened.

See If Anyone Involved In The Accident Has Injuries

Once you manage to stop your vehicle, you should check yourself for any injuries. Check your limbs to ensure they did not break from the force of the impact. If you have shattered windshield or windows, check to see if you have any scratches as well. 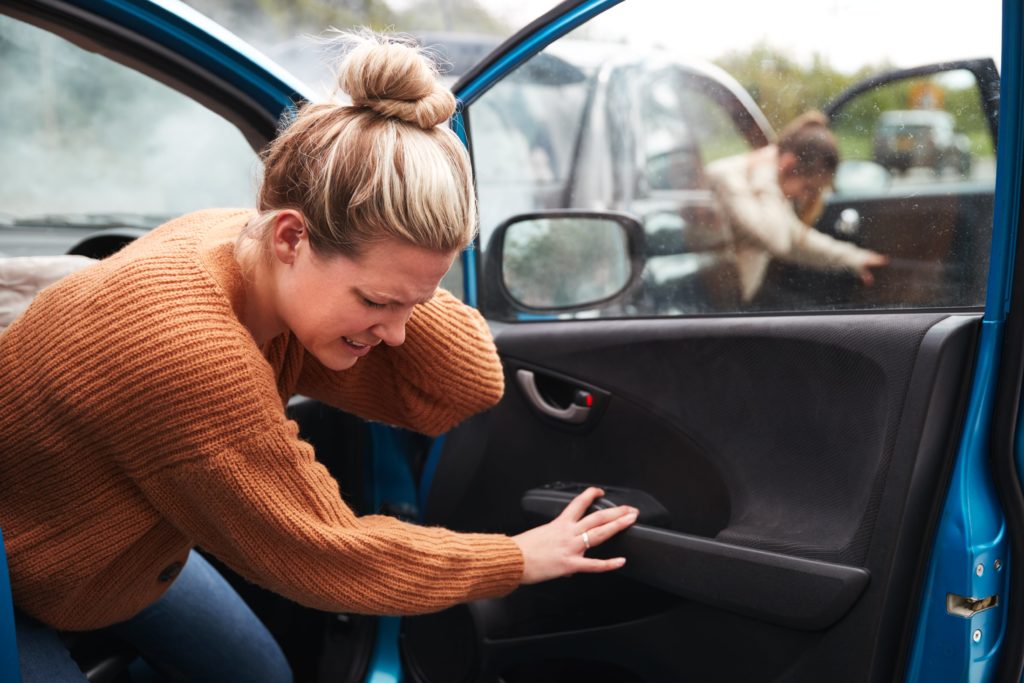 After you inspect your body for injuries, check everyone else in the car if you have passengers along for the trip.

You can also step out of your car and see if the people inside the other vehicles involved in the accident are okay.

If you do spot someone injured, you may get the urge to approach them and provide first aid. Though your heart is in the right place, the law may not view your actions as kindly.

Attempting to administer first aid when you are not licensed to do so opens you up to potential liability. The person you treat may get injured further because of your actions, and they can sue you because of that.

As much as possible, refrain from offering first aid to the people at the scene of the accident. What you can do instead is to take out your smartphone and place an important call.

Calling 911 is always a wise move in an emergency. That holds true in the aftermath of a car accident.

Every second matter if someone is badly hurt, so don’t hesitate to pull out your phone and place a call to 911 right away.

But what if there was no one injured at the scene of the accident, or at least it seems that way? Should you hold off on calling 911 then?

You should still place that call anyway.

Contacting emergency services is necessary not only for getting someone immediate medical attention. In a situation as chaotic as one that emerges following a car accident, you will need police officers at the scene as soon as possible.

Most of the time, the police will respond to your call and head on over right away, but that is not always the case.

Police officers may consider certain factors into consideration such as the severity of the accident and where it took place. Don’t expect the police to show up if the accident took place on private property.

The scene of the accident could play a huge role in whether they can resolve the issues related to the accident quickly.

Don’t worry, though. Even if the police officers don’t head over to the scene of your accident, there are still ways for you to protect yourself from taking on liability unnecessarily.

Signal To Other Drivers That An Accident Has Taken Place

The roads in California are not known for featuring light traffic. The exact opposite is true in many cases.

Hopefully, you were already able to keep your car away from traffic when you pulled over earlier, but you may not always be able to do that. Furthermore, you can’t hop into the driver’s seat of another person’s car and move their vehicle for them.

The best thing you can do in this situation is to warn other drivers they are approaching an accident scene.

Go back inside your car and turn on your hazard lights if you didn’t do so earlier. If you happen to have some road flares on hand, you can go ahead and use those too.

Swap Important Information With The Other Driver At The Scene

Since car insurance is a must if you want to be a car owner in the state of California, you should swap insurance info with the other driver involved in the accident.

During this process, make sure you ask for essential details such as the full name of the driver and his/her contact information. Along with those details, you should also find out what insurance policy the other driver has. Request the policy number too.

Go ahead and ask your fellow driver for his/her license. Take note of the important details included in that ID, and don’t forget to also write down the plate number of your counterpart’s car.

Talking to your fellow driver at the scene of the accident is a non-issue as long as you choose your words carefully. Problems may arise, though, if you talk too much.

If the other driver is already aware that he/she is responsible for this particular auto accident, don’t be surprised if he/she tries to shift the blame on to you.

This is why you are better off limiting what you say during your conversation. Stick to trying to obtain the important details from the other driver and refrain from commenting further if he/she wants to steer the conversation elsewhere.

Collect Evidence At The Scene Of The Accident

You have probably already collected a fair amount of important information from talking to the other driver in the accident, but that’s not enough. To give the police and the insurance providers no reason to suspect that you are responsible for the accident, it’s in your best interest to obtain as much evidence as you can.

We already talked about getting the name, contact details, the insurance info, the other car’s plate number, and the details included on the other driver’s license, but you can work to obtain more evidence.

While you are in the middle of trying to obtain evidence, make it a point to speak to the police officers who respond to the accident. They will be the ones investigating the accident, and it would help you immensely if they can corroborate your claim.

Insurance providers will probably want to speak to the authorities at some point as they are trying to verify your claim. You can make the process easier for the insurance providers by giving them the names, badge numbers, and contact details of the police officers who responded to your accident.

Hold on to those details so you can remain updated on the progress of the investigation.

Describing the scene of the accident could prove helpful to your case. Write down the exact address where the accident took place, the date and time when it happened, and you can also describe the positioning of the vehicles involved.

Speak To Witnesses And Get Their Statements

The facts of the case are not the only pieces of evidence that can help things turn out in your favor. Just like in court cases, witness testimony can also prove helpful.

Speak to any people nearby who saw the events happen. Ask them to write down what they saw or, if you have your smartphone with you, you can also record their testimony.

Once you obtain the testimony from the witnesses, you should ask them for their contact details. Let the police officers and insurance providers talk to them if they want to learn more about what exactly happened during the accident. 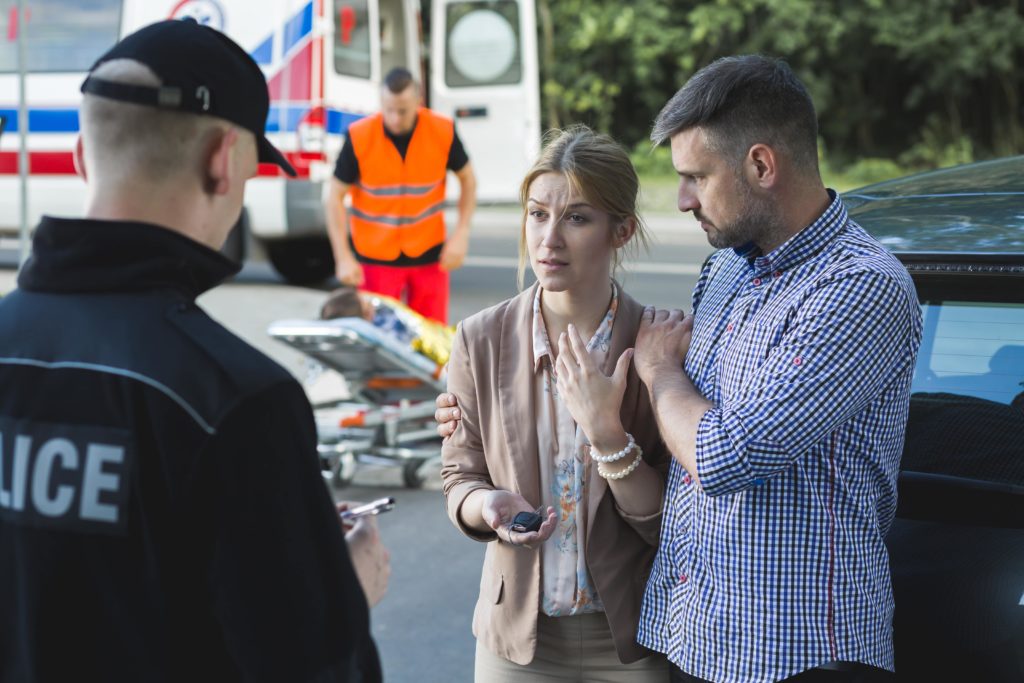 While we’re on the topic of smartphones, that handy device will also make it possible for you to gather some hard-to-refute pieces of evidence. More specifically, you’ll take pictures and record videos of the accident scene with the aid of your smartphone.

Pictures are worth a thousand words as they say, so go ahead and utilize them to your advantage here. Take as many pictures and record as many videos of the accident as you can store on your smartphone.

You can also take pictures of the contact details provided to you by the police officers and the witnesses. Use them as a backup in case you lose the pieces of paper where you wrote down the contact information.

Fill Out And Submit An Accident Report

The police officers responding to the accident may have with them a document known as an accident report. This is a report you will want to accomplish.

You will also need that report when the time comes for you to file an insurance claim.

If the police officers did not head over to the scene, you should go to the police department yourself and file the accident report there.

Go To Your Doctor For A Comprehensive Check-Up

The injuries you can sustain from a car accident can vary quite a bit.

You may end up with nothing more than superficial scratches or something more serious such as a broken bone. Some car accident injuries are so severe that a trip to the emergency room may even be necessary.

What makes dealing with accident-related injuries even tougher is some of them may not present any outwardly obvious symptoms right away.

Concussions may not rear their ugly head until well after the accident.

Before saying you are fine, you should pay a visit to the doctor. Get a full-body check-up and see if you sustained injuries you were unable to detect previously.

Knowing the full extent of your injuries will help you get fair compensation from the insurance provider.

Speak To A Lawyer And Ask For Their Assistance

You hope receiving fair compensation will be no problem if they prove you were not at fault for the accident. Unsurprisingly though, some insurance companies are not necessarily inclined to pay even if the facts say that they should.

At the least, they may try to reach a settlement that involves them paying out a smaller amount.

Don’t allow insurance companies or other drivers to take advantage of you. Speak to the lawyers at Quirk Reed right away and ask for their help in this complex legal matter.