Rear End Collisions: Can You File A Lawsuit?

Rear End Collisions: Can You File A Lawsuit?

Rear-end collisions are one of the most common types of traffic accidents, and they vary a great deal in severity. Some collisions are minor while others result in injuries that are severe or long-lasting.

Every state has laws mandating who is responsible for paying damages to the other party. California is a fault state, meaning that the person or persons at fault must pay for the other driver’s damages. Like many other states, California law includes a presumption that the vehicle that rear-ends another vehicle is at fault. However, there are exceptions to this rule of law that might result in the driver in front being partially or entirely to blame.

Less common than speeding or tailgating, there are situations where a driver puts their car in reverse either on purpose or by mistake. The driver might be driving under the influence, not paying attention, or impaired. Sometimes drivers intentionally try to get hit in order to collect insurance money. Some drivers are negligent by driving with broken brake lights that prevent them from realizing they have stopped. In any of these scenarios, the front driver might be liable for the accident.

California has numerous driving laws in place to help prevent situations that will lead to rear-end collisions. Following them and staying alert to conditions at all times can help prevent accidents when other drivers don’t follow the law.

Two California laws, in particular, dictate who is at fault when a vehicle crashes into the rear-end of another. One is California Vehicle Code (CVC)21703, which mandates that a driver of a vehicle may not follow another vehicle more closely than is reasonable and prudent. The driver must consider the speed of the vehicle, the condition of the road, and the traffic.

The second law is California’s Vehicle Code 22350, or “Basic Speed Law.” This law says drivers must never drive faster than is safe for the current conditions regardless of the posted speed limit. Failure to maintain a safe distance and a safe speed are the most common reasons rear drivers crash into the cars in front of them.

California also follows the two-second rule to trail distances, except that the time extends to three seconds. According to this rule, the driver should stay back from the car they are trailing for three seconds “worth.” If something unexpected causes the driver in front to break, this may give the following driver enough time to brake.

Increasing the distance between vehicles is also advised when driving:

– With a heavier vehicle weight

These laws focus primarily on preventing rear-end collisions by driving at a safe speed and a safe distance. These are the most common causes of rear-end collisions, but there are other factors that often play a role. They include:

You never know when conditions will change. Alert drivers who stay focused on the road are less likely to hit the car in front of them. There are also some steps to take to help prevent another driver from hitting you from behind.

Preventing Rear-End Collisions From Happening to You

It might seem impossible to control what drivers behind you do or how they drive. But sometimes you can anticipate situations where a rear-end crash is likely and take steps to prevent it. Drivers often place their attention on the driver in front of them without noticing what is happening behind them. It’s worth the added effort to help prevent becoming the victim of a rear-end crash.

Stay Alert to the Drivers Behind You

Perform regular mirror checks so you know if a car follows you too closely. Keep calm and don’t let the driver agitate you. Hitting the brakes is a common strategy for getting drivers to back off. This tactic might backfire and cause the driver to strike your vehicle instead. Braking for no reason could also shift some or all of the fault for the resulting accident to you!

Increase the Distance Between You and the Front Driver

In heavy traffic, keeping the distance between you and the cars in front and behind you can be a balancing act. You might be tempted to get closer to the car in front of you to prevent getting hit by the car behind you. This only increases your chances of hitting the car in front and causing a collision or a deadly multi-vehicle pileup.

Instead of advancing forward, slow down to increase the distance between you and the car in front of you. This will give you and the tailgating driver more time to stop in case the front driver brakes suddenly.

Drivers sometimes think that driving well below the speed limit is an added safety measure. They don’t realize that driving too slowly can be just as dangerous as speeding. Traffic builds up behind the slower driver, enticing following drivers to pass even when it isn’t safe.

Driving slowly also encourages drivers to tailgate when they can’t get around the car. California’s vehicle code 22400 mandates that “no person drives on a highway at a slow enough speed to impede or block the normal and reasonable movement of traffic except in cases where there is a need to reduce speed for safe operation.”

With stopped traffic at construction sites, intersections, or traffic lights, approach gradually and don’t stop too closely to the vehicle in front of you. Always leave enough room for escape in case a vehicle approaches too quickly from behind to stop.

Watch your mirrors while stopped. If a vehicle approaches quickly from behind, start creeping forward slowly. Try to hold your foot on the brake to alert the approaching driver to slow down. This provides the driver with more space to stop once they realize traffic is stopped. If they fail to reduce their speed, take your escape route if available.

People often think that rear-end collisions aren’t serious; that they’re just little fender benders that happen when a driver gets a little close. Although those that involve large, heavy vehicles traveling at high speeds are the most traumatic, any hit from behind may cause painful injuries. Even less serious injuries can be long-lasting.

Most vehicles are rear-ended while they are traveling at slow speeds or are completely stopped. The vehicle absorbs the full force of the impact, jerking the car and the passengers forward suddenly. The seatbelt causes the body to jerk back just as quickly. The body and spine crash back against the seat and the head snaps forward and backward. This violent motion can cause a number of injuries, including:

Some people don’t realize they’re injured after the collision. They might begin to feel a little stiff and sore within days or weeks of the accident. They might not even connect their symptoms with the accident.

Ideally, it’s best to see a doctor immediately after an accident even if the accident seems minor. Early intervention might help prevent any injuries from advancing. Also, keeping a complete medical history will help with your case. There are two main requirements to winning a personal injury case. First, you must prove that the other driver was at least partially at fault. Second, you must prove that you were injured in the accident the other driver caused.

What Happens After a Rear-End Collision?

Victims of rear-end collisions might face thousands of dollars in medical bills, future medical costs, lost wages due to inability to work, loss of their vehicle, and more. If you are the victim of a collision caused by another driver’s negligence, you deserve compensation for all of your damages. Getting your maximum compensation might require filing a lawsuit against the at-fault driver. Every California driver should know their responsibilities after an accident.

California drivers have 24 hours to report accidents to law enforcement. This applies to those accidents where someone was injured or killed. Always call law enforcement since some injuries aren’t apparent immediately after the wreck.

Drivers must also report the accident to the DMV within 10 days if another person was injured or killed or if the property damage exceeded $1,000. This law applies even if you aren’t the at-fault party.

If the other driver is at fault, you will file a claim with their insurance company. The insurance company might require a written or recorded statement or even an examination under oath. They might contact other drivers and witnesses in the case. You must provide documentation of your damages related to the accident.

During the first few days after the accident, the at-fault driver’s insurance company reaches out to you with an offer. Although it might sound like a good offer, these initial offers are almost always well below the amount you need to cover your losses. If you accept, you could sign away your legal rights and any chance you have of seeking the additional compensation you need.

Typically, insurance adjusters focus on the damage to the vehicles. If the damage to vehicles is minor, they might deny your injury claim. They might offer a very small claim in spite of your injuries. This is a good time to have a personal injury lawyer look at your claim. They can tell you what a reasonable offer is and isn’t.

Your attorney can handle the negotiations with the insurance company to try and get a fair settlement. If negotiations fail, the next step might be to filing a personal injury lawsuit. Your attorney works with you throughout every step of this process. He knows the law, your rights, and the time limits for getting your claim filed on time. 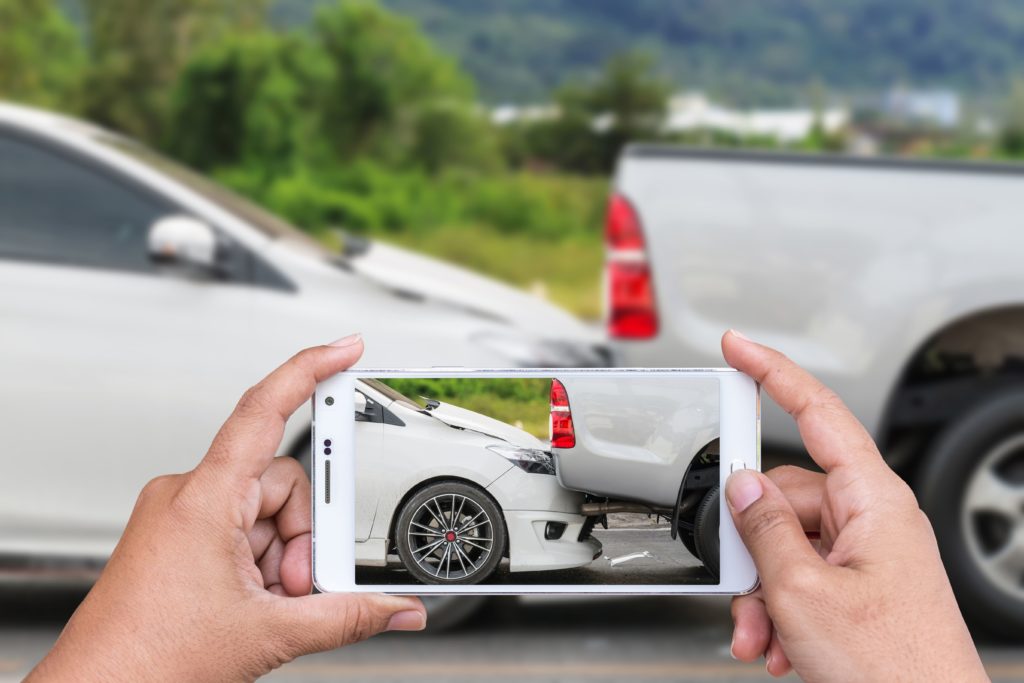 You only have one chance to gather evidence at the scene. Hopefully, you took pictures at the scene, including vehicle damage and your injuries. You also need the names and contact info of any witnesses. Your attorney can use this evidence and the accident report filed by law enforcement to prove the other driver’s fault.

You must show clear proof of how the rear-end collision impacted your life. Keep a thorough record of your medical treatments and prescriptions. Gather all of your medical bills, including any future medical costs that you face. Take receipts for the costs of repairing or replacing your vehicle.

Have you missed work due to your injuries? If so, you deserve compensation for lost wages too. That includes any additional earnings like bonuses that you missed.

Once you and your attorney compile the evidence, you will file a formal complaint explaining the details of the accident and your injuries. Your attorney will help you outline your reason for filing the complaint and provide all the necessary information.

Even a minor rear-end collision can have a serious impact on your life. Choosing the right attorney to help with your claim could mean the difference between frustration and getting the compensation you deserve. Contact Quirk Reed to schedule a consultation. Our experienced legal team has the expertise to get the best results for you.