9 Common Motorcycle Crashes And How To Avoid Them

Home/Motorcycle Accidents, Personal Injury/9 Common Motorcycle Crashes And How To Avoid Them
Previous Next

9 Common Motorcycle Crashes And How To Avoid Them

Given a motorcycle’s smaller size, lack of protection that four-wheel vehicles offer, and vulnerability to hazardous weather and road conditions, motorcyclists are much more likely to be injured or killed in a crash. In fact, in 2017, common motorcycle accidents injured nearly 90,000 people and killed over 5,000 more.

Most motorcyclists do their best to stay safe by wearing a helmet and other protective gear to reduce the risk of injury in a crash. Others take courses that teach them to drive defensively. But no matter what precautions you take, if you drive a motorcycle long enough, you can expect to experience some trouble.

We at QR Firm want to keep you safe out there on the road while you enjoy your ride, and that means taking preventative measures so you won’t become another statistic.

Here are nine causes of the most common motorcycle accidents and what you can do to avoid them. 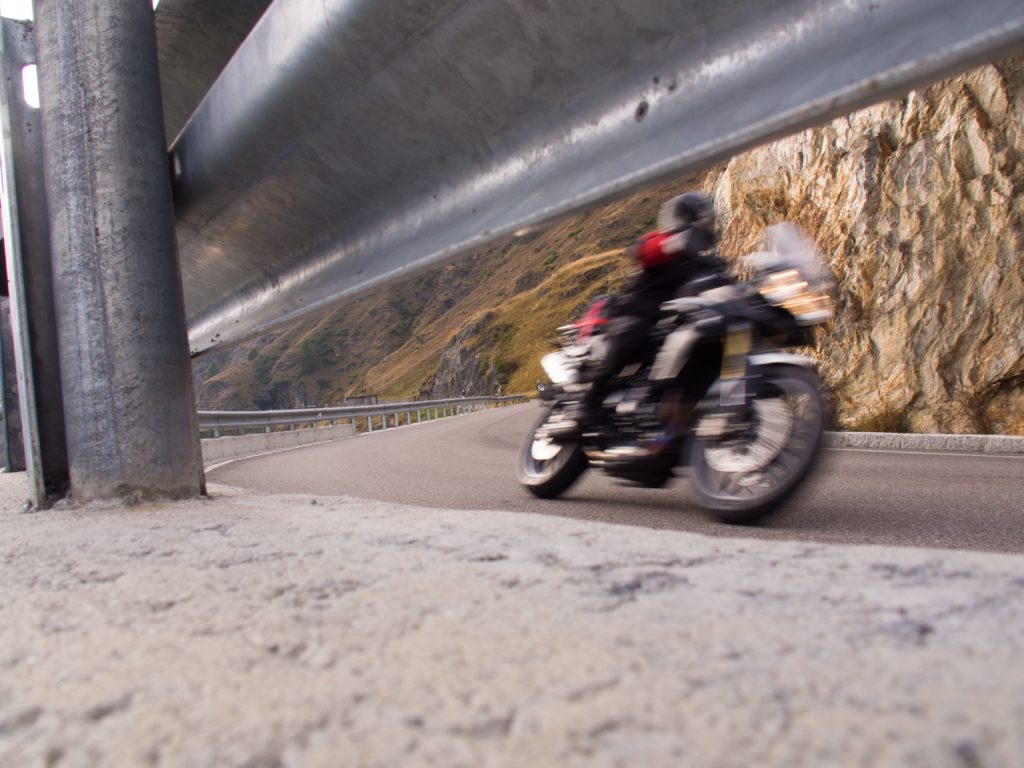 According to the National Highway Traffic Safety Administration (NHTSA), approximately one-third of multi-vehicle accidents occur when another vehicle turns into the path of a motorcyclist.

The most common motorcycle accident occurs when a car or another vehicle fails to identify a motorcycle and turns into their path. This usually happens at intersections when a motorist is going straight or trying to pass the vehicle in front of them.

The vehicle making the turn is often considered at fault for these accidents; however, this is only true if the motorcyclist was obeying traffic laws and practicing safe driving at the time of the accident.

Avoid an accident: One of the most important things motorcyclists can do is prepare to take evasive action in every situation. Remember, many drivers aren’t on the lookout for motorcycles due to their smaller size Anticipate other driver’s movements by looking for:

Should any of these occur, begin to slow down and prepare for a car to enter your space.

Despite the danger to themselves and others, there are many drivers who neglect to check their blind spots when changing lanes. Motorists may be distracted by other occupants in the vehicle, a phone call, or texting, making sudden lane changes not only possible but probable.

Adding to the danger of sudden lane changes is the fact that motorcycles are small enough to fit into a blind spot, making it easy for even the most vigilant driver to miss them while looking both ways.

Avoid the accident: Stay out of the driver’s blind spots whenever possible. If you do need to pass a car, spend as little time in the blind spot as you can. As with large trucks, the rule of “If you can’t see my mirrors, I can’t see you,” applies to motorcycles and cars. If the driver sees you, there is a better chance they’ll avoid encroaching on your space.

Stay vigilant and watch for turn signals, the turning of driver’s heads, and other signs that indicate a driver is about to change lanes. Unfortunately, if a driver is distracted, they may not display these indications, making it imperative for motorcyclists to pay attention to what’s happening around them.

Lane splitting is when a motorcycle drives between two lanes of slow or stopped traffic and most often occurs in backed-up traffic or at traffic lights. This can be a dangerous (and illegal nearly everywhere in the U.S. outside of California) practice due to the close proximity of cars on either side of the motorcycle and the reduced maneuverability of motorcycles when in strict confines.

Additionally, lane splitting may startle the drivers of four-wheeled vehicles who aren’t expecting to see another vehicle passing them while traffic is slow or stopped.

Avoid the accident: Lane splitting may get you to the head of the line faster, but it takes away several routes of escape by placing you in between two larger vehicles. The best way to prevent motorcycle accidents that come from lane splitting? Don’t do it! If you must, be sure to carefully consider the safest way to do so.

While it is unlikely that a motorcyclist will get hit by a car door while lane-splitting, the same cannot be said when driving in the death zone. This area is located in between a lane of traffic and a row of parked cars and received its name because so many motorcyclists receive injuries from drivers who open the door of their stopped car without looking behind them.

Avoid the accident: Don’t be tempted to drive in between active and parked traffic, even if it looks safe. If you do find yourself speeding toward an opening car door, put the brakes on as soon as possible — decreasing your speed might mean the difference between life and death.

Taking a corner too fast is a sure way to separate yourself from your bike, especially if you try to overcorrect it. This is especially true when road hazards such as gravel, sand, leaves, or standing water are present.

Whether a motorcyclist misjudges the severity of the turn and takes it too fast, or hits a pile of leaves at the wrong angle, this common motorcycle accident can not only leave them bruised and broken, it can also leave them vulnerable to additional harm. Other vehicles may not be able to see far enough ahead to avoid a fallen motorcyclist, creating an increased risk for injury or death.

Avoid the accident: Road hazards are all too common for cyclists, so it’s important to ensure you know how to deal with them correctly. Remember that motorcycles are more likely to be affected by the build-up of debris than a four-wheeled vehicle. Drive through debris such as leaves or gravel head-on rather than while turning.

Remember the rule “slow in, fast out.” Enter corners wide at a slow speed, increasing speed as you exit. If you enter a turn too quickly and feel like you can’t complete it, don’t panic! Overcorrecting can be just as dangerous as speeding. Instead of slamming on the brakes or jerking the handlebars, lean into the turn and keep your eyes focused ahead. 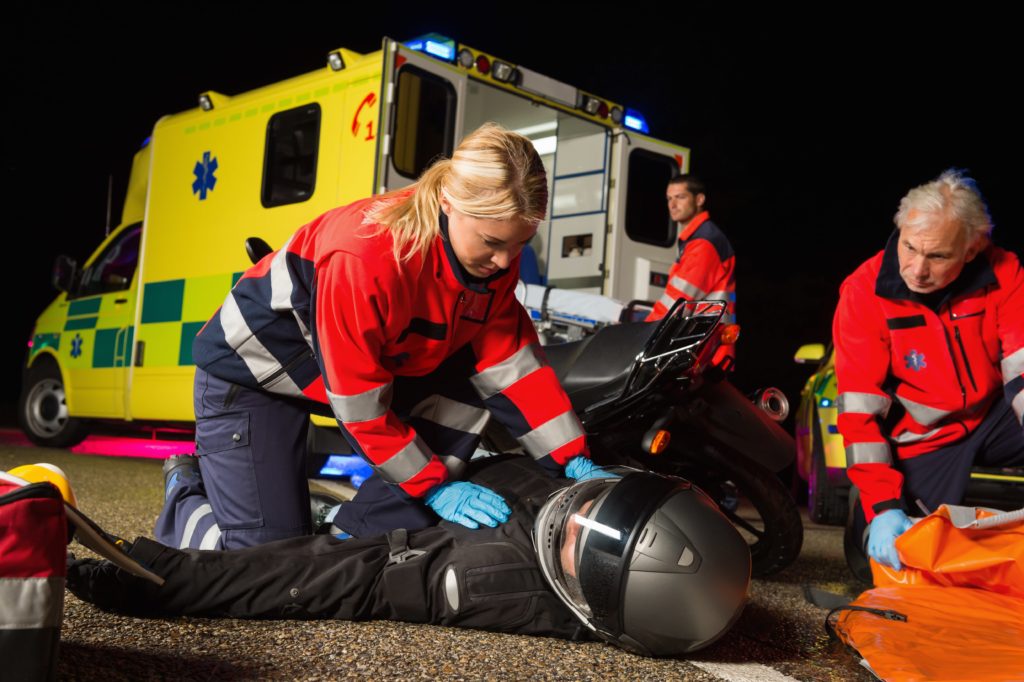 Besides being terrifying, frontal collisions are also some of the most fatal common motorcycle accidents. Head-on collisions often happen at high speeds, which significantly decreases a motorcyclist’s chance of survival.

Frontal collisions occur when a driver swerves into an oncoming lane of traffic. This often happens when one driver is distracted, under the influence, or fatigued. It can also occur when a driver is trying to pass a slower vehicle on a two-lane road and does not see the motorcycle approaching or does not leave enough time to safely return to their lane.

Avoid the accident: The National Safety Council (NSC) recommends following the four R’s to minimize your risk of being involved in a frontal collision.

Rear-ending most often occurs when a motorcycle slows down for a traffic light or stop sign, or if the motorcyclist needs to brake suddenly for a pedestrian, road hazard, or animal. If the vehicle behind a motorcycle is tailgating or distracted, they may not stop in time to avoid hitting the motorcyclist.

While four-wheeled vehicles may consider this a minor fender bender, they can be fatal to motorcyclists who don’t have the benefit of airbags, seatbelts, or other protection.

Avoid the accident: If it is legal in your state, utilizing lane splitting may help minimize your risk of being rear-ended (although it does present risks of its own).

If lane splitting is not an option, keep to one side of your lane so that you can escape if the car behind you does not appear to be braking as it approaches you. It is also wise to leave a gap between yourself and the car in front of you as a buffer zone. Keep your eye on vehicles that are behind you to ensure you are not taken by surprise.

While rear-ending is less likely to occur on highways, it does happen. Avoid it by allowing faster cars to move past you and refrain from brake-checking tailgaters.

Motorcycles are well-known and loved for their ability to go fast — but that does not mean it is smart to do so. While it is tempting to utilize your speed, it is important to remember that the faster you go, the less likely other drivers are to see you.

Avoid the accident: What’s the best way to avoid a speed-related accident? Adhere to the speed limit! Use common sense and follow the law rather than attempting to get your thrills by going fast. If you are looking for adventure, try driving your motorcycle through an area you’ve never been rather than engaging in dangerous speeding.

Perhaps due to the social nature of motorcycling, 25 percent of fatal motorcycle crashes involve alcohol impairment, the highest statistic of any vehicle (per data collected in 2016). Driving under the influence of alcohol or other substances inhibits judgment, balance, and other crucial skills that motorcyclists require in order to drive safely.

Avoid the accident: Keep yourself safe from related motorcycle accidents by never driving under the influence. If you are preparing to drink or feel as though you can’t drive safely, ask for a ride, or use a ride-share app to get where you need to go. It might be a hassle to come back in the morning for your motorcycle, but it is worth it.

When You Do Your Part…

While not all accidents are avoidable, many can be mitigated by preventative measures such as:

Your job as a motorcyclist is to drive safely and responsibly. Protect yourself, your passengers, and the drivers around you by avoiding risky and unsafe behavior.

…We Can Do Ours

Even if you take all the necessary precautions when driving, accidents can still happen. That’s where we come in.

Our personal injury lawyers are here for you when unexpected accidents occur that threaten to upend your life. Here at QR Firm, we understand the effects a personal injury can have on you and your family and that’s why we fight for you.

If you’ve been injured in a motorcycle accident, our professional lawyers can help you receive the maximum compensation that you are entitled to under the law. Unfortunately, the people involved in your case may operate under an implicit bias where motorcyclists are concerned — such as if they believe that motorcyclists are generally less responsible drivers. This way of thinking can make it difficult for you to recover the same amount in damages as a car driver might.

You need a personal injury lawyer who will advocate for you and your rights just as they would for anyone else — and that’s what we will do. We make your fight our fight.

When you find yourself the victim of an accident, don’t hesitate to get in touch with our Oakland personal injury attorneys at QR Firm. We can offer you the same results that our previous clients have enjoyed.