Dooring Has Become A Danger For Bay Area Cyclists

Dooring Has Become A Danger For Bay Area Cyclists

If you ride a bicycle in the Bay Area, you may have experienced “dooring,” a relatively new phenomenon that is causing falls and injuries for cyclists. Read on to learn how this happens, how to minimize the risk of dooring, and what to do if you are the victim of a dooring incident.

Dooring is when a driver side car door opens suddenly and strikes a cyclist coming up alongside the vehicle. It can be the driver of the car or truck who opens the door, or it can be a passenger in the rear exiting the vehicle. These bike accidents happen all over the city, particularly on one-way streets, where all the traffic is headed in the same direction.

Dooring can also occur on the passenger side of the vehicle with children riding on the sidewalk. Unless it is otherwise banned, it is legal for children under the age of 13 to ride on the sidewalk in many Bay Area communities.

It doesn’t take a large area of impact to cause a serious or even fatal accident for a cyclist in a dooring accident. Just jarring the tip of the handlebars can cause a cyclist to veer into traffic.

Why Is Dooring So Dangerous for Cyclists and Others?

Dooring is dangerous for bike riders for multiple reasons. As you might imagine, the simple act of a car door being flung open and hitting a cyclist can cause impact injuries anywhere on the body. Cyclists who have been “doored” report bone fractures, deep cuts (AKA lacerations), abrasions, punctures, and soft tissue trauma to muscles, tendons, ligaments, and fascia.

Even worse, the cyclist may be thrown from their bike, either sideways or over the handlebars. Hitting the pavement or other traffic after being struck by a door can result in the same injuries listed above, as well as head, neck, and back trauma. Some cyclists have wound up with concussions and other types of traumatic brain injury, as well as spinal cord injuries. These can have long-term consequences and affect their finances, quality of life, and ability to work.

If a cyclist tries to avoid an opening vehicle door at the last second, they may veer into traffic and be hit by other vehicles. Their actions may also precipitate other accidents if a car swerves to try to avoid the cyclist but hits another car. One carelessly flung vehicle door can then result in a domino-like string of accidents involving many people.

Cyclists who are involved in dooring crashes may suffer personal property damage as well. Often, their bicycles are damaged and may not be rideable again because the damage is so excessive. Personal property on their bikes or bodies may be damaged, too, such as biking clothing and items being carried to and from work. This includes expensive electronics like laptops, tablets, and mobile phones.

Dooring accidents are renowned for the emotional trauma they inflict on cyclists. Some cyclists wind up with various types of psychological pain and suffering, including:

The same kind of PTSD (post-traumatic stress disorder) that happens after car crashes can occur after a dooring incident. Cyclists may be fearful of getting back on a bike, which can affect their commuting transportation or recreational activities. Messengers who earn a living by making deliveries on a bicycle may be out of work entirely. 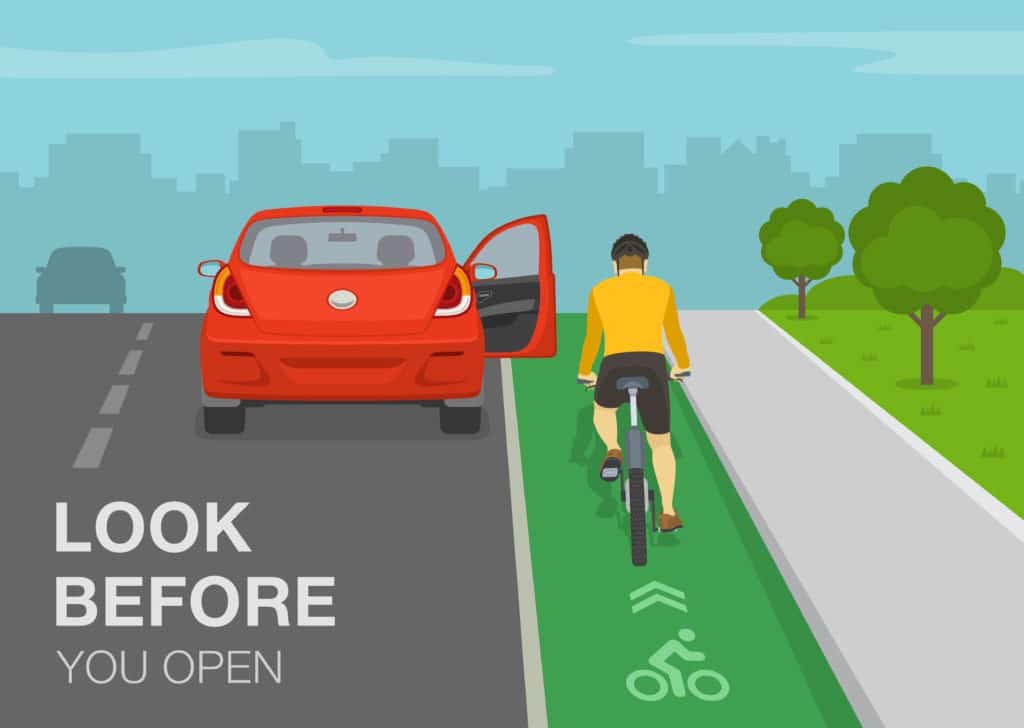 Dooring has a variety of causes, some of which may occur simultaneously, contributing to one accident. One of the most common causes of dooring is driver and passenger carelessness. Many drivers and their passengers throw open their car doors without looking first.

You’ve probably witnessed this in mall or grocery store parking lots, where people frequently hit or even dent other people’s cars without batting an eye. These same thoughtless people may see a nearby bike lane or even notice cyclists passing but still open their doors too quickly.

Some drivers and passengers are distracted, too. They may be in a rush after spending extra time trying to locate an on-street parking place. Or they may be talking on their cell phones and not paying attention to cyclists going by.

In some cases, especially in crowded spots around the Bay Area, space on the roadways for bicycles is slim to nonexistent. Even when there is a bike lane, the door zone of the adjacent parking lane often intrudes on it. In other instances, bike lanes are poorly marked, or drivers don’t know what they are.

Unlike in countries like Denmark and the Netherlands, where bikes may outnumber cars on some thoroughfares, in the US, many people lack good driver etiquette, particularly when it comes to bikes. If safety isn’t enforced in a given community, drivers may operate under the impression that they don’t have to watch out for bikes, as incorrect as this is in the eyes of the law.

The state of California Vehicle Code 22517 actually forbids drivers and passengers from opening a vehicle door on the traffic side until it’s safe to do so, including checking for bicycles. This means that someone who doors you is liable, which we’ll discuss below.

Increased Number of Cars and Bikes on the Road

The Bay Area is already heavily populated, but each year, the number of both cars and bikes on the road increases. According to the San Francisco Municipal Transportation Agency, vehicular traffic entering San Francisco grew by 27 percent between 2010 and 2019. During that same time period, vehicle registration grew by 6 percent, as did citywide bike trips.

Bicycle use has increased even more over the last year in California due to the coronavirus pandemic. Some people have replaced their commute on public transportation with a bike ride as a safer, more socially distanced option. Others are riding bicycles because their health clubs are too risky or closed for the time being. Families with no school activities to occupy kids are also taking to the streets on their bikes as a way to get out of the house and keep busy. Unfortunately, as bike use is on the rise, so are bike accidents.

Of course, cyclists have to be attentive, too. When passing parked cars, it’s essential not to become distracted and to watch for people who start to open their doors or exit their vehicles. And you need to obey the rules of the road, too, or else you may be at fault in a dooring accident.

Cyclists who blow through traffic lights when they should stop, for example, may get hit by a door when a driver looks back, thinks they’re going to obey the light, and instead suddenly sees them appear alongside their vehicle.

How Can You Prevent Dooring?

While it’s not possible to guarantee you’ll never get doored, there are some steps you can take to reduce your risk of dooring. Follow these tips to lower your chance of a dooring accident while bicycling. 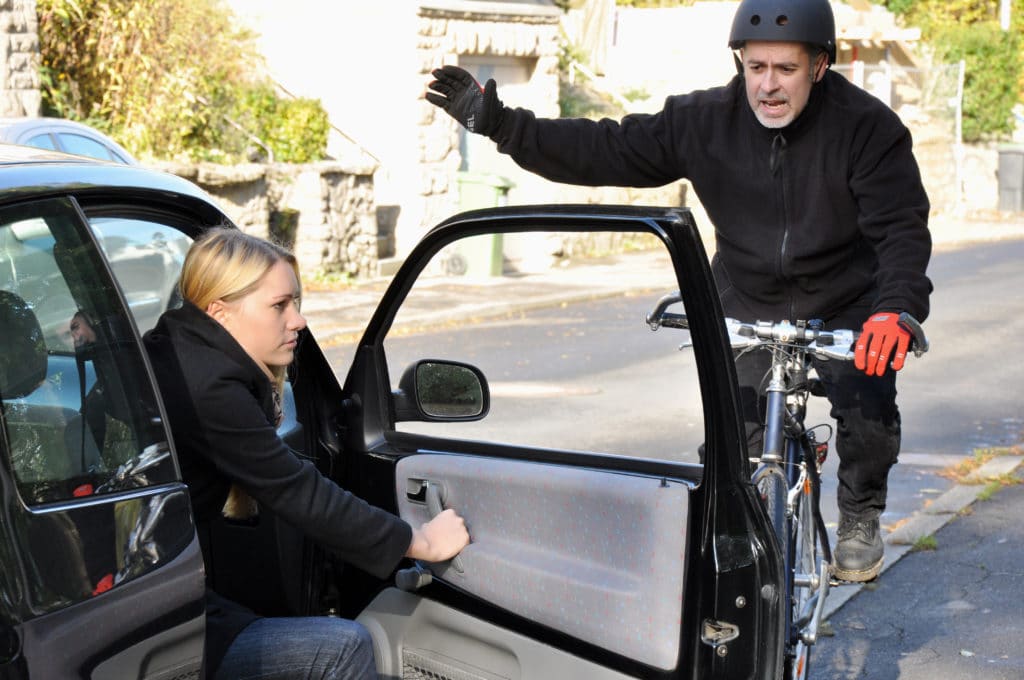 What Should You Do if You Are Involved in a Dooring Accident?

If despite taking all the precautions above you are involved in a dooring accident, follow the steps in this section afterwards.

Call 911 for first responders. If you are not able to call yourself, accept help from others. Don’t assume you’re fine. Sometimes, shock can mask pain and serious injuries.

Exchange information with the motorist involved. Even if you think you may be partially at fault, do not say anything to that effect. Also, take down contact information for any witnesses to the accident. If the driver expresses their guilt at causing the accident, they may change their mind later. Witnesses can back up your story about what really happened.

Make sure the police take your story and fill out a report. Although they may document the accident scene, you should do the same with your mobile device. Don’t destroy any evidence, such as a broken bicycle.

Seek medical advice and consider taking an ambulance to the ER for any injuries, symptoms, or signs that you might have been seriously hurt, including the following:

When in doubt, get checked out anyway. You could have a hairline fracture or other injury that goes undiagnosed. You could also have injuries that are known to cause delayed pain and symptoms, such as a concussion, whiplash, back injury, or sprain. If you have a serious baseline medical condition or are pregnant, you should also get checked out.

Should You See an Attorney After a Dooring Incident?

You will likely be offered an insurance settlement by the carrier of the person who doored you. Understand that they will try to pay the least amount possible and force you to settle quickly. However, you may have injuries or long-term consequences like loss of work that don’t surface right away.

Never negotiate with an insurance company or accept an offer too fast. If you think the settlement is not sufficient, it’s smart to confer with a bike accident lawyer who is knowledgeable about this process. In fact, after any dooring accident, it’s a good idea to talk to an attorney.

A bike accident lawyer Oakland can help you deal with the other party’s insurance company and assemble all the documents you need to make your case. They can even represent you in court if necessary. You may be entitled to significant damages for:

Have you or a loved one been injured in a dooring accident while cycling in the Bay Area? Reach out to the Quirk Reed law firm today. You can call us at 888-858-1925 or use our online form to request a free consultation. We want to see you get any compensation you deserve, so you can put your accident in the past and move on with your life.