What Happens If You Are At Fault in a Car Accident?

Home » Blog » What Happens If You Are At Fault in a Car Accident?
Previous Next

What Happens If You Are At Fault in a Car Accident?

What to Do After a Car Accident In Oakland

It’s nearly impossible to grasp the severity of a car accident immediately after it happens. Focusing on the guilt or worry that you might be to blame can get in the way of doing what is needed. Right now, you need to focus on what to do to keep the situation from getting worse.

Stay at the Scene and Call for Help – First and foremost, never leave the scene of the accident. It’s against the law, and there might be someone who needs your help. No matter how bad things seem right now, the consequences of fleeing the scene could be a lot worse. In California, leaving the scene of an accident that results in serious, permanent injury or death is punishable for two to four years in prison.

Never Admit Fault – It’s human nature to want to comfort another person when they are distraught. Apologizing for the wreck and taking blame might seem like a harmless way to remedy the situation immediately, especially if you’re already worried that you are at fault. The problem is that your words might come back to haunt you later on. Even if the accident turns out to be at least partly the other driver’s fault, they will use your statements to argue that you were completely to blame.

Don’t Discuss the Details of the Accident – Don’t volunteer your version of how the accident happened or mention who caused it and who didn’t. Also, don’t ask the other driver questions about what happened to try and get their take on who caused it. Instead of worrying about fault at this point, focus on what you can do to help.

Stay Calm and Be Polite – If you feel angry, wait until your initial feelings of anger pass before you talk with the other driver. Stay polite and keep your conversations as limited as possible. The less you say, the less likely you are to say something you’ll regret.

Check to See If Anyone Is Injured – Check on the passengers of all vehicles involved, including your own. If there were pedestrians or bike riders nearby, check on them, too. If anyone is injured, call 911.

Call the Police – Sometimes drivers don’t want to call law enforcement for any of a number of reasons. Some worry that their insurance premiums go up. Others don’t want their whereabouts known at the time the accident occurred. California law requires drivers of vehicles to call the police within 24 hours after an accident that results in injuries or death to any person. But, it’s in your best interest to always call the police after an accident. They will prepare an accident report that covers the details of the accident. This report could prove valuable if you end up on the wrong end of a lawsuit. It might even help prove that you weren’t at fault after all.

Collect Evidence – Start by collecting names, addresses, and phone numbers from everyone else involved in the accident. Next, ask anyone in the area if they witnessed the accident and get contact information for those who saw what happened. Once you leave the scene, you will lose access to this evidence.

Use your cell phone to take pictures of the scene. Get shots of all the vehicles involved, the license plates, and anything lying in the roadway that might have contributed to or resulted from the crash. Capture anything that you believe might have caused the accident, including empty beer cans or broken traffic lights.

Contact Your Insurance Company – No one wants to face the potential of claiming an at-fault accident on their insurance policy. But, there is no other alternative. Failing to report the accident in a timely manner could result in your insurance company not paying and causing you even more financial problems.

Contact An Experienced Attorney – This might be your first car accident – or at least the first one that you thought was your fault. An attorney who has handled many car accident cases can determine whether you are partly or entirely at fault for the wreck. He can advise you on what to do to protect your rights and minimize your penalties.

What Happens If You Are at Fault in a Car Accident and You Don’t Have Enough Insurance Coverage? 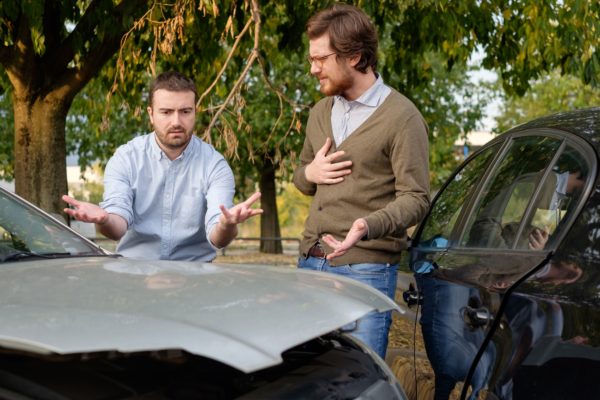 Many people only pay the minimum amount of insurance required by their state. When they are at fault for an accident, it is up to their insurance company to pay for the other party’s injuries and damages. The insurance only covers up to the maximum amount of coverage on the at-fault driver’s policy. That means you could end up owing thousands of dollars more than the insurance pays. In that case, you should secure the services of a good attorney.

California is a comparative negligence state. This means that even though you are held partly responsible for an accident, the other party can also receive some of the blame. An experienced attorney might provide evidence that the other party was also partly at fault for the accident. This would reduce your liability and prevent you from having to pay the full amount of damages to the other party. It could also allow you to sue their insurance company for your losses that they are responsible for.

If you are at fault and your insurance doesn’t cover the full amount of the damages, the other party still has the legal right to recover the entire amount of damages from you. They might file a personal injury lawsuit against you. This puts you at risk of losing any assets or savings you might have.

When Is An Accident Probably Your Fault?

Most states are at-fault states which assign liability in a car accident. This means that the person who causes the accident is responsible for the injuries and damages caused to the other drivers, passengers, and anyone else harmed by the accident. It doesn’t matter whether your actions are intentional or the result of negligence.

You are at fault for hitting another vehicle whether you misjudge the distance between you or you get frustrated and run into traffic. The only difference is that intentionally hitting another driver or person can result in criminal charges. Although these types of car accidents do occur, more often, they are the result of negligence.

Negligence means failing to act with the degree of reasonable care that the law expects of you under the circumstances. Some examples of negligent driving include:

Determining Fault After an Accident

As we already mentioned, the police report helps to determine fault. But, what happens when the police report isn’t 100% accurate? Law enforcement gets it right the majority of the time. But, the police officer only has the information of those involved, the witnesses, and the evidence left by the car crash to base their opinion on. When someone involved is en route to the hospital or has lost their life, they aren’t able to give their version of how the accident occurred. Often, law enforcement must base the police report on one side of the story.

The police report never goes in front of the jury at trial. The policeman bases the report on his own opinion based on what the drivers and witnesses say, the location of the vehicle damage, and any apparent signs of negligence on the part of either driver. The officer wasn’t there when the accident happened and didn’t see it firsthand.

A good law firm doesn’t base their opinion only on the police report. They use their own investigators and accident reconstruction experts to get a more accurate picture of what really happened. Your attorney should take the time to talk to go out and talk to the officers who responded to the accident. They will interview all the witnesses, including those not mentioned in the police report. Interviews with ambulance drivers and fire department personal can also provide additional information.

Now Is the Time to Ask Yourself, “What Happens If You Are At Fault in a Car Accident?”

Most people don’t prepare for a car accident because they don’t believe they will ever be in one, especially not one that is their fault. No matter how confident you are in your driving skills, it’s a good idea to carry an emergency kit with you at all times. It might even prove useful if you are a witness to another driver’s accident.

Many of the commercial emergency kits available don’t have the right variety or quality of equipment. Consider creating your own to ensure you have everything you need when the time comes. Keep everything together in a small bag or case so you can find what you need quickly. Some things to include:

If you have allergies or other medical conditions, carry a medical alert card with you at all times. You want to protect your health if you are the injured party and are unable to speak.

You can also take preventive steps to protect your assets if you are ever in an at-fault car accident. One of the simplest ways to accomplish this is to increase your insurance coverage. Most drivers don’t carry nearly enough insurance to pay for damages in a serious car accident.

Take a good look at your insurance policy. How much does it allow per person or per accident for bodily injury and property damage? If you have the minimum required insurance in California, your policy pays up to $5,000 in property damage to the other driver. That’s probably adequate if you hit a 20-year-old car with more than 200,000 miles on it. With many of the vehicles on the roads today valued at $30,000, $50,000, and beyond, the odds are against you. How are you going to pay for the other $65,000 in damages to a $70,000 car that you totaled?

The issue of bodily injury is even greater. In an accident where one or more vehicles were extensively damaged, there is also a greater risk of serious injuries or even death. If you and the other vehicle had numerous passengers, the cost of medical transport, emergency treatment, and other types of damages grow even larger. With an insurance policy that pays $30,000 per accident, you could end up owing the other victims millions of dollars.

A car accident can have lasting effects on anyone involved. The at-fault party might have to deal with their injuries and the financial and emotional burden it causes. If you are at-fault for a car accident, talk with an attorney who will get to the truth about who caused the accident to happen.

If you’ve been in a car accident in California, contact Quirk Reed Law to schedule a consultation. We will provide you with answers about what happens if you are at fault in a car accident and help you understand your rights. We have a long track record of helping our clients get the best possible outcomes for their cases.